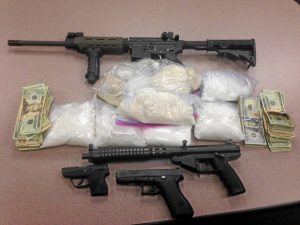 Several months of complaints about drug related activity at a home in Bristol, Va, near Highland View Elementary Shcool have now resulted in six arrests. 33-year-old Jamie Skeen, the main resident of the home was found with meth, Suboxone, and a switchblade knife following a traffic stop. 35-year-old Archie Ramsey and 34-year-old Jessica Ramsey were found with a gun and drugs following a traffic stop of their car leaving their residence. 49-year-old Michael Scot Biller was caught possessiong an AR-15 rifle after leaving the home and was charged with possession of a firearm by a violent convicted felon. 24-year-old Nathaniel Shelton and 26-year-old Eric Whisman was found in possession of weapons and drugs after leaving the location as well.