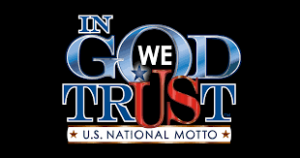 Tennessee Lawmakers have passed a bill that will require schools to display the national motto, “In God We Trust.”
It now goes to Governor Haslam for approval. If he signs the bill it would take effect immediately. The measure would require schools to display the motto in a prominent location. Other states have had legal challenges over whether or not the motto represents an unconstitutional government endorsement of religion. Haslam says he will look at the legislation when it reaches his desk bu that he is not of the thought that having a motto somewhere changes a lot of people’s thoughts.