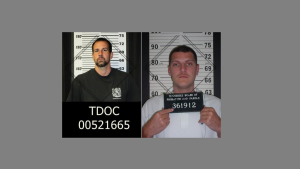 Two men are wanted by Church Hill Police for attempted to pass of numerous fraudulent checks. Scott Eric Sammons, 40, is wanted for forgery, Identity theft and theft under $1,000. Mathew Roupas, 41, is wanted for forgery, attempted Identity theft and attempted theft under $1,000. Roupas was unsuccessful in his attempts but Sammons managed to get away with around $985. Anyone with information on their locations is asked to contact the Church Hill Police Department.