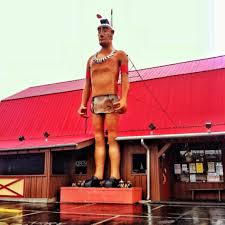 The iconic character “Big John” at Pratt’s BBQ, which has stood straight and tall since 1954, is now leaning over toward the parking lot. A phone call reporting the issue to the business was initially thought to be a prank but a quick inspection revealed the condition of “Big John” to be accurate. Pratt’s has vowed to do everything they can to restore him to his former glory!