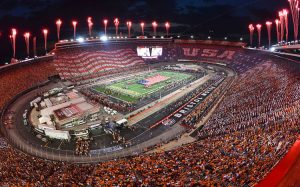 Since the success of 2016’s ‘Battle at Bristol’, the Tennessee Genereal Assembly have been considering the future of the Last Colleseum. Now they have passed the Event Tourism Act in hopes that it will aid Bristol Motor Speedway, and other sporting venues in the state to attract similar spectacles such as the epic clash between Tennessee and Virginia Tech. The highly anticipated game set the NCAA attendance record for the Football Bowl Subdivision schools, with a crowd of well over 160,000. According to a report from Nashville, the act would reimburse a locality for qualifying event-related expenses that are approved by the state’s Departments of Tourist Development, Finance, and Administration.