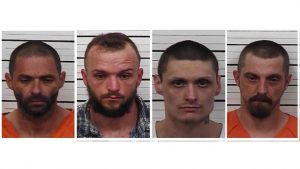 Deputies in Hawkins County are searching for a prisoner who escaped, along with three others who have already been recaptured. Deputies are looking for 34 year old Aaron Morelock who escaped through a hole in the fence near the recreation yard, along with the other three who were later apprehended. Local autorities including the Tennessee Highway Patrol are using more than 30 officers to search for Morelock, who is considered a non violent inmate. Morelock is wanted on numerous offenses including drup possession, theft and weapons charges.