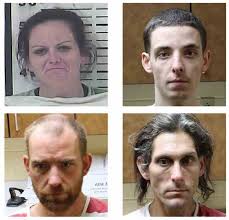 A video was shown in a Carter County courtroom Wednesday depicting four people accused of attempted murder viciously beating a victim because they say he took their drugs. Kasey Miller, Matthew Dye, Ross Kelly, and Michael Silcox each were bound over to a grand jury after a video was found showing Kasey Miller beating the victim with a baseball. The video goes on to show another of the four cutting the victim with a knife. All four are schedule for court on September 19th.