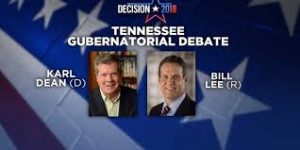 Tickets are now on sale for a televised Tennessee Gubernatorial debate to be held in Kingsport next month. The Tennessee Public Broadcasting System will air the debate between Republican Bill Lee and Democrat Karl Dean. The event is being held at Eastman’s Toy F. Reid Employee Center on October ninth. The one hour debate begins at seven pm, and the doors open at 5:45. Tickets are available at the Kingsport Times News or The Johnson City Press.