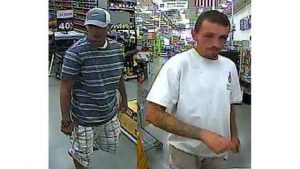 Kingsport investigators are searching for two suspects they say stole a company credit card and used it to make more than two thousand dollars in purchases. The card was allegedly stolen from a company vehicle in Johnson City, but was used to make purchases at two Lowes Stores in Kingsport. The police department has pulled surveillance footage of the two suspects and we’ve posted those images on our Supertalk Webpage.