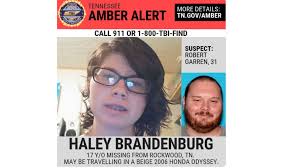 The Tennessee Bureau of Investigation issues an Amber Alert for a missing 17 year old female from East Tennessee. 17 year old Haley Brandenburg was last seen Monday at a Rockwood Tennessee Walmart. Rockwood is just northwest of Knoxville. Brandenburg has medical issues and is without her medications. She may be traveling with 31 year old Robert Allen Garren. Garren, could be driving a 2006 Honda Odyssey van. Brandenburg is described as five feet five inches tall, weighing 120 pounds with brown hair and green eyes. She was seen wearing tan Adidas pants with a pink stripe down the side with a green subway shirt. Brandenburg wears glasses and has braces.