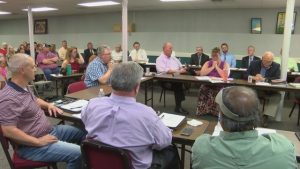 Officials with the Washington County Board of Education and Dr. Bill Flanary have reached a contract agreement with his position as Director of Schools. Flanary, first served as interim director following the resignation of Director of Schools Kimber Haliburton in May. The board approved Flanary as the new director in October. His 19 month contract was approved Thursday evening by the Board on a 7-2 vote. The specifics of the contract are not being released at this time.