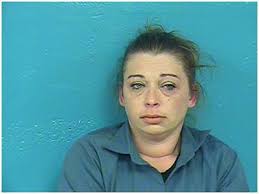 A weekend pursuit in Sullivan County has landed a Bluff City woman in jail on multiple charges including DUI, and Felony evading charges. The Tennessee Highway Patrol attempted to pull over 31 year old Goldie Jomarie Harmon who was driving on Highway 11E without her lights on. Harmon refused to stop and drove into the median and oncoming traffic. She continued driving out of control through Sullivan County then crashed into a telephone pole. Authorities also discovered alcohol on Harmon and in the vehicle.