No Injuries, But Apartment Heavily Damaged In Kingsport 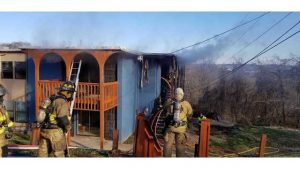 No one was injured, but at least one Kingsport Apartment was heavily damaged by a Thursday afternoon fire. Kingsport fire firefighters responded to the three pm blaze at Tuscany Villa Apartments off of West Stone Drive. Smoke from the fire could be seen around the city and Teasel Drive was shut down while fireman battled the blaze. The American Red Cross is assisting the displaced family.