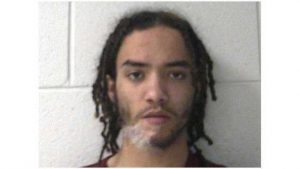 A man is arraigned Monday in Johnson City after being arrested by Johnson City Police for threatening to shoot someone near the Tree Street area of the city. 20 year old Marcus Anthony Cardwell was arrested and charged with possession of a firearm with altered serial numbers, evading arrest and resisting arrest. Police responded to the 700 block of Wilson Avenue regarding a threats call. The victim told police Cardwell threatened to shoot him and others. As officers arrived, Cardwell fled from authorities and found transportation away from the area. Police stopped a vehicle matching the description and found Cardwell as a passenger. Cardwell fled on foot again and resisted arrest while being taken into custody.