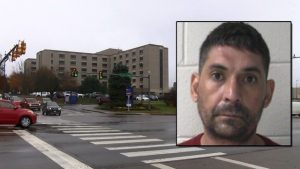 A man in Johnson City is arraigned and faces charges after being arrested for chasing a woman and stabbing another man at a Johnson City hospital. 38 year old Christopher Jackson was seen chasing the female into Johnson City Medical Center around four AM Monday. Jackson, the allegedly stabbed a man sitting in his vehicle outside the hospital. The victim was not seriously injured.