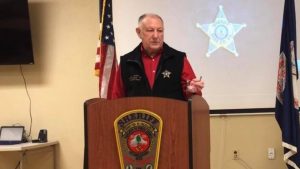 A long time southwest Virginia sheriff has announced he will not seek re-election next time around. Veteran law enforcement officer and current Wise County Sheriff Ronnie Oaks says after 23 years as sheriff, he has decided to not run again when election time rolls around. Oaks, who is 73 began his law enforcement career in 1969 as a member of the Virginia State Police and was first elected as Sheriff in 1996. An election to select a new sheriff is scheduled for November of this year.