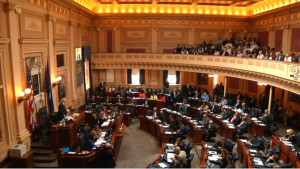 Virginia State Delegate Israel O’Quinn has an opponent for an upcoming GOP Primary in June. Michael D. “Oz” Osborne has announced his plans to run for the spot currently occupied by O’Quinn, as these two squared off in a previous election in 2011 that O’Quinn won. The two Bristol natives hope to sway voters at the polls as the election takes place June 11th.