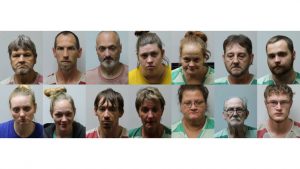 Sixteen people are rounded up and arrested in Johnson and Carter Counties following a joint operation searching mainly for probation violators. All the arrests in Carter County were arrested for probation violations and failure to appear charges. The original charges against those arrested included drug violations, theft and DUI charges. Two arrests on active warrants were made in Johnson County.