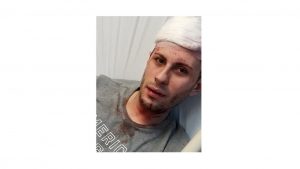 A man has been arrested by Bristol, Tennessee Police after led them on a dangerous chase which included one officer falling out of a vehicle.

Christopher Wayne Palmer is charged with felony evading arrest, reckless endangerment, and failure to stop for a stop sign.

Palmer was already wanted on multiple warrants out of Sullivan county.

The chase began after officers responded to a report of drug activity in the parking lot of a business on Bellebrook Road.

The officer that fell out of the vehicle is unharmed while palmer suffered injuries that are not life-threatening.