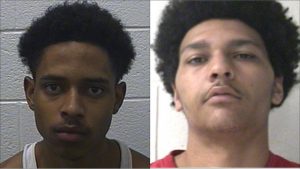 Four people including two juveniles are behind bars for allegedly breaking into an apartment and robbing the homeowner in Johnson City.

Police say they were called to the Deanwood Apartments on Carroll Creek Road in reference to a home invasion. An investigation found that the suspects kicked in the front door to the apartment and threatened the individuals inside with a gun. A shot was then fired and the suspects took money from the homeowner. They then fled on foot when police arrived.