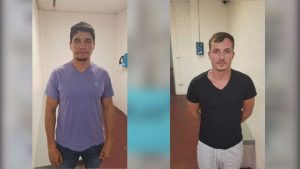 They used cloned credit and debit cards to make multiple, large, withdrawls of from the Knoxville TVA Employee Credit Union on Bluff City Highway and were found with more than eight thousand dollars in cash. In addition, suspects Viktor Frana, identified by an international driver’s license and Ambroz Bojan identified by a Czech Repubic ID card were arrested after returning the next day to the same credit union where they withdrew large amounts of cash with the cloned cards the night before.