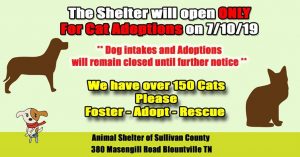 The Sullivan County Animal Shelter will be opened Wednesday for cat adoptions while the canine section remains closed due to another outbreak of the highly contagious Parvo Virus. So far eight dogs have died due to the disease, nearly a dozen died last month after an earlier outbreak. Represenatives from the University of Tennessee’s Shelter Medicine Department says spaying, neutering and lack of vaccinations contributed to the latest outbreak. University officials have been conducting deep cleaning procedures at the county facility in hopes of preventing other outbreaks of the canine disease.