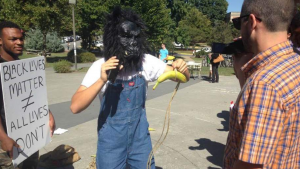 A former East Tennessee State student arrested for wearing a racially-charged outfit to a Black Lives Matter rally goes on trial in Washington County, Tennessee. In 2016, then-incoming freshman Tristan Rettke came to the gathering at Borchuck Plaza on campus wearing a gorilla mask and carrying a rope noose with a banana attached. He is charged with civil rights intimidation, disorderly conduct and disrupting a gathering. Rettke left ETSU following the incident but said in a statement issued by his attorney that his appearance at the rally was protected by his First Amendment rights.
(PHOTO: Associated Press)