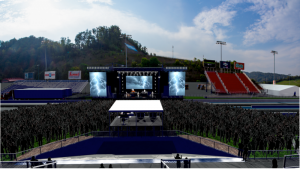 We have received word that Saturday evening’s inaugural Alabama concert at Thunder Valley is being postponed due to ongoing health problems with singer Randy Owen. The concert was to be the first of its kind at Thunder Valley Amphitheater , but will now be held at a later date due to Randy Owen’s continued treatment for vertigo and migraines. According to Bristol Motor Speedway, all tickets purchased through the Thunder Valley amphitheater and Ticketmaster will be honored on the rescheduled date That date has not been set but the band is trying to reschedule as soon as possible.