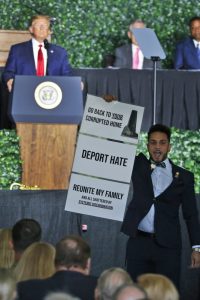 A representative in the Virginia House of Delegates disrupts President Donald Trump during ceremonies in Jamestown on Tuesday.

Delegate Ibraheem Samirah of Herndon said shortly after in a statement on his Twitter account that Trump hijacked democratic values founded in Virginia and criticized the president’s directive to four Congressional women of color to go back to where they came from.

House Speaker Kirk Cox called Samirah’s outburst disrespectful and a violation of the rules of the House, noting it was inconsistent with common decency.