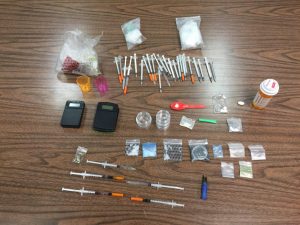 A response to a suspicious vehicle in Scott County Virginia has resulted in the arrests of four people on drug and weapons charges in two separate incidents involving the same vehicle. Elissa Estep a convicted felon was arrested after Scott County Deputies found her in possession of methamphetamine, cocaine and a loaded firearm in a jeep she and a passenger were parked in behind a closed business. Later that day Deputies spotted the same jeep leaving a residence. The Jeep was stopped again, and deputies searched the home owned by Christina Smith after she gave deputies permission. Deputies found in plain view Methamphetamine, cocaine, marijuana as well as needles and other drug paraphernalia. Deputies then arrested Smith, along with Kendra Kidwell and Cole White who were also in the residence.