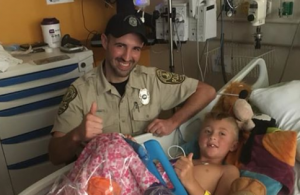 A child is recovering after being bitten by a poisonous snake at Breaks Interstate Park in Dickenson County.

The juvenile was playing with family members at the facility’s splash park when he was bitten on the fingers by what rangers believed to be a timber rattlesnake but doctors have said the bite was from a copperhead, according to a report posted by the park.

They also said the snake likely came out of a ground squirrel hole that park officials have now filled.

PHOTO: Breaks Park Superintendent Austin Bradley and a juvenile that park officials said was bitten by a snake near the attraction’s splash park. (BIP / Facebook)