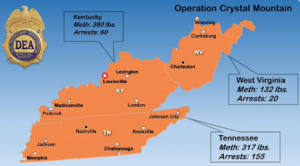 More than 800 pounds in methamphetamine was seized by officers along with $800,000 in cash, 52 weapons and an assortment of other drugs including heroin. A total of 155 suspects were apprehended in Tennessee during the enforcement action.