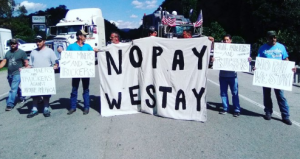 Coal produced at mines owned by Blackjewel in Southwest Virginia is staying put until out of work coal miners are paid. That’s the latest coming from court filings in West Virginia bankruptcy court.

Coal currently sitting in cars from operations in Russell and Wise counties will not be moved due to federal labor laws prohibiting the action. A similar agreement has also been proposed for materials produced in Harlan County, Kentucky where miners continue to block Blackjewel rail lines for a fourth consecutive week.