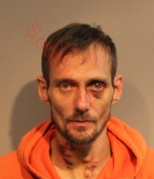 Jonathan Eric Smith, 39, had to be pepper sprayed before he was taken into custody. He was seen standing near the female victim who had screamed for help and was covered in blood due to stab wounds in her chest, back, stomach and shoulder. Smith is scheduled to be sentenced on Nov. 26. He faces up to 50 years in prison