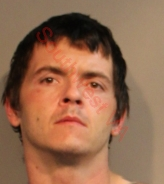 An arrest of a wanted suspect in December has resulted in an indictment by a Scott County grand jury for 95 counts of child pornography.