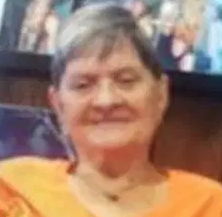 UPDATE: McCracken has been found “safe and sound” according to a report from the KPD.

An endangered adult alert was issued by the Kingsport Police Department after a Blountville resident was reported missing Tuesday afternoon.

She is 5 feet 5 inches tall weighing 179 pounds with brown hair and brown eyes. Police said she was last seen wearing a white shirt with red stripes, blue jeans and sandals. The department also said she could be traveling with her adult daughter Marcella Devane in a white late model GMC SUV.