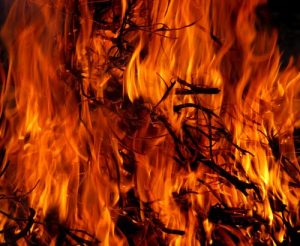 Evidence of extremely dry conditions in Southwest Virginia made evident Wednesday as firefighters from Dickenson County and the state’s Division of Forestry were called in to quash a blaze that began as a house fire some 7 miles outside the town of Haysi and grew to more than 80 acres by late afternoon.

The county’s Emergency Management Agency director Richard Thacker: “We’ve got two dozers and the Department of Forestry to try and suppress the fire. We declared a local disaster and put a burn ban in place because of the dry conditions, and yes, it is very, very dry.”

Thacker noted that the house was a total loss and three other homes in the line of the fire were protected by workers.