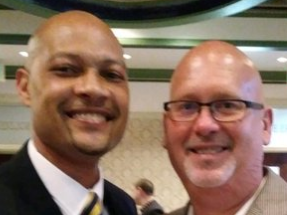 Men’s head basketball coach Steve Forbes confirmed the news on social media of the former basketball standout that was part of the ETSU teams that made the NCAA tournament including a first round upset of third-seeded Arizona in 1992. Talford was also a multi-sport standout at Castlewood High School.

Talford remains hospitalized. Former teammate Marty Story told the Johnson City Press that Talford is doing better but has a long road ahead of him.