Police: Man Allegedly Made Threats to the White House, Arrested on Drug Charges 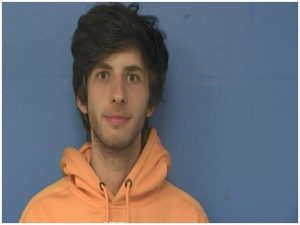 An Oak Ridge man is arrested in Sullivan County after police say he made threats about going to the White House to “spread joy.”

A deputy with the Sullivan County Sheriff’s Office spotted and pulled over Brandon Fine, 21, Wednesday evening on Interstate 81 near mile marker 70, after receiving word from Oak Ridge Police that he said he was going to get naked, jump the fence, and find the president at the White House. When police initially pulled over Fine, he told them he didn’t want to talk about his day and he was in route to Washington D.C. A Secret Service agent stopped to interview Fine, and after receiving consent to search his vehicle, officers found what is believed to be nearly 17 grams of marijuana and paraphernalia that included rubber pipe/bong, a scale, a grinder, among other items. He was arrested on charges of six counts of drug paraphernalia and possession of schedule VI.

The Secret Service agent on scene told police he would handle the White House threat situation by documenting the threat Fine made.