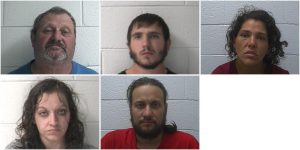 Five people are charged following an alleged burglary over the weekend at a home in Johnson City.

According to the Johnson City Police Department, they were called to a home at the 100 block of East Maple Street, and found damage to windows, a door, and a lock. Inside, they found five suspects and the contents of the home reportedly ransacked. Authorities have charged the following for aggravated burglary:

All five suspects were transported to the Washington County Detention Center where they were being held on a $2,000 bond. They are scheduled to appear in Washington County General Sessions Court for arraignment today at 1:30 p.m.