UPDATE: Coal miners in Washington to lobby for protected pensions 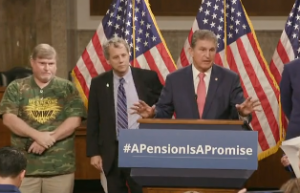 Retired miners from the Coalfields have converged on Washington to lobby for a bill that will protect pensions in cases of coal companies filing for bankruptcy. Senator Joe Manchin of West Virginia who introduced the American Miners Act earlier this year says other pensions for other organizations including teamsters and auto workers are also in jeopardy of failing within a few years.