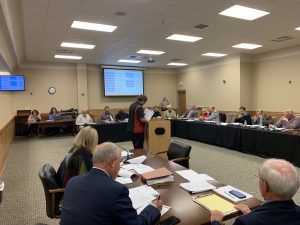 The Washington County Commission has voted to wait on taking action on Jonesborough’s proposal for a new K-8 school and athletic facility.

During a special called meeting Thursday night, commissioners heard from several residents, while also hearing from Washington County representatives, who have been in continued negotiations with the Town of Jonesborough on proposal terms all week. The latest terms were delivered to commissioners less than an hour before the meeting began. One major hurdle that both the county and town continue to negotiate terms on is the price of the proposal, which costs of $26, $32, and $34 million were all mentioned as possible final figures on the project. Chuck Vest, Jonesborough Mayor says he feels the town is still in a good place to get approval on the project even after the delayed action by the commission.

“I think the last issue out there can be resolved, that is if the county wants to get it done, it will get done,” Vest said.

The commission will once again consider the proposal at their regular meeting scheduled for October 28th.