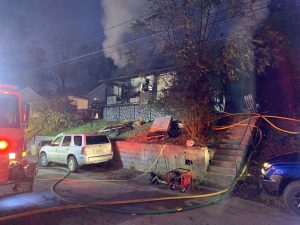 -The firefighter taken to the hospital suffered minor injuries, but has since returned to duty.

-Multiple animals including two dogs and two cats were rescued from the home, crews are still searching to see if any other animals were inside.

-Crews are cleaning up the fire.

The Bristol, VA Fire Department and other areas crews are working a house fire that occurred early Thursday morning.

According to Donald Farley, Bristol, VA Fire Department Battalion Chief, they were dispatched to a house fire at the 1100 block of Vermont Avenue just after 5:00 a.m. He says two occupants were inside, and were able to escape safely before calling 911. As of 7:15 a.m, crews were still battling the fire, and Farley says one firefighter was taken to the hospital to be treated for non-life threatening injuries. The Red Cross has been notified. Multiple agencies including the Bristol, VA Fire Department and Bristol, VA Police Department are on scene.