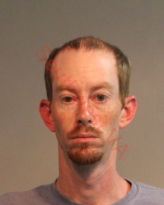 Brian Patrick Williams admitted to shooting his then-girlfriend in the arm. He also made the comment that if he had to do it all over again he would ‘do it the right way.’

Williams, 37, was sent to prison for 8 years in Wise County Circuit Court in connection to the July 2018 shooting that resulted in charges of malicious wounding, abduction, and a weapons charge.

Police viewed security camera footage from his home in Pound and saw Williams chase the victim with a gun, hold her down on the ground and then shoot the victim at close range.