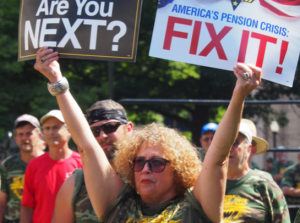 Senate Majority Leader Mitch McConnell of Kentucky has thrown his support behind a bill that will preserve pensions for 92,000 retired coal miners and their families.

McConnell’s backing was seen by some as the last step to secure the funding that will be taken from the Abandoned Mined Land Fund to keep the pension accounts from going insolvent by 2022.

(PHOTO: United Mine Workers of America)