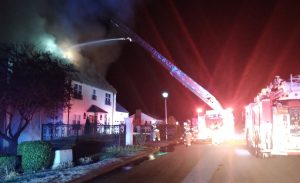 The Greeneville Fire Department tells Supertalk they were called to a structure fire on Crestwood Drive just after 6:30. Residences inside were able to escape without injury. One firefighter suffered minor injuries but has since been treated and returned to work. Fire crews say the two story home suffered smoke and water damage especially in the attic area. Several area crews assisted the Greeneville Fire Department.