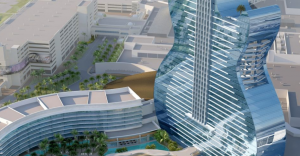 Officials with Hard Rock International on Monday confirmed Friday’s announcement of their intentions to operate the proposed casino resort planned for the Bristol Mall property.

Hard Rock Chairman and CEO Jim Allen said in the prepared statement that they are excited to bring the legendary brand of hospitality and entertainment to the birthplace of country music while being a driver for jobs and visitors.

A referendum vote on the casino could happen as early as November next year for Bristol voters. Co-developer Jim McGlothlin said their proposed resort would bring $450 million in revenue within five years and more than 5,000 jobs.

The plans have their detractors with some voicing concerns over crime rates increasing because of the presence of the gambling house. Several faith-based organizations have questioned the moral effects a casino could have on the community.

Here is the official statement issued to SuperTalk on Monday:

HOLLYWOOD, Fla. – Nov. 25, 2019 – Hard Rock International, a global leader in the entertainment and hospitality industry, is pleased to announce a partnership with the Bristol Resort & Casino team to create Hard Rock Casino Bristol. Once final approval is received from the Commonwealth of Virginia and the citizens of Bristol, Virginia, Hard Rock, working with the local ownership group, will operate the proposed resort and casino.

“We are excited to collaborate with Hard Rock, a well-respected and legendary entertainment brand with legions of devoted customers across the country and around the world,” said Jim McGlothlin, CEO of The United Company and partner on the project. “Hard Rock is known for its 31 award winning hotels and 12 casinos, in addition to 218 cafes and Rock Shops® which offer a wide range of amenities that appeal to many different audiences. Hard Rock’s iconic brand speaks to its deep roots in live music entertainment and world-class memorabilia collection, which will play a prominent role at Hard Rock Casino Bristol. This focus on music will complement our region’s country music heritage and dynamic music scene in the Twin City.”

“We’re excited to bring our legendary Hard Rock brand of hospitality and entertainment to Bristol, the birth place of country music, just as we have done in other locations all around the world,” said Jim Allen, Chairman and CEO, Hard Rock International. “As a brand, we serve more than 120 million guests a year across 75 countries and we are committed to becoming an integral part of the community and driver of jobs and visitation.”

Hard Rock has extensive experience making projects an integral part of the local community. Hard Rock’s reputation will make the property a major draw for visitors from across the Mid-Atlantic and Southeast. With the resort as a gateway to the region, the partners will use their resources to introduce visitors to the many other wonderful tourism, cultural and recreational opportunities available in the Tri-Cities and across Southwest Virginia.

“After vetting multiple leaders in the industry, we are convinced that Hard Rock is the best fit for our project and our community,” said Mr. McGlothlin. “The Hard Rock team understands the significant economic development impact the Hard Rock Casino Bristol will have on the city and the entire surrounding region, in terms of new jobs and additional tax revenue. As seasoned casino resort operators, they are committed to working closely with us to maximize the benefits of this project for local residents while highlighting the many opportunities this region has to offer to all.”