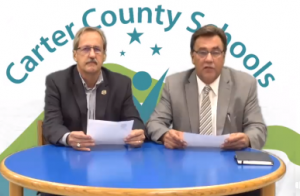 Director of Carter County Schools Kevin Ward in a service message posted Monday to address consequences of threats made on social media platforms in light of posts made last week in Northeast Tennessee including Elizabethton threatening violence at area schools.

Sheriff Dexter Lunceford reminded parents and students to stop the spread of threats by contacting school or sheriff’s office personnel when they see unsettling messages on social media.

“I’m asking you not to make an original post or repeat something you may have heard, saw, or read on any social media site involving any kind of threat or alleged threat.”