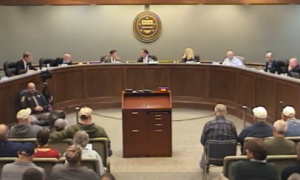 The Washington County, Virginia Board of Supervisors have made their county the latest to adopt 2nd amendment sanctuary status.

During Tuesday’s meeting, board members unanimously approved the resolution 7-0, sending a message to legislators and state government in Virginia that it will intend to protect the right to bear arms and oppose any such legislation or law that would infringe on those rights. Despite much support for the resolution from citizens who attended the meeting, some board members including Eddie Copenhaver and Phillip McCall spoke about how they were contacted by people who opposed adopting the resolution.

In recent days, several other neighboring counties have expressed interest or have announced intentions to adopt 2nd amendment sanctuary status.

Courtesy of Image: Washington County, Virginia Board of Supervisors Meeting/Livestream