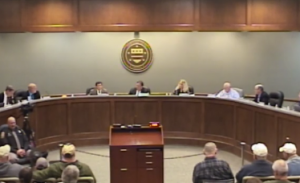 “…This resolution sends a strong message to the governor and to Richmond that we in Washington County, Virginia require no new laws, no restrictions.”

Supervisor Randy Pennington on a vote by county lawmakers joining a wave of other local governments across the state in passing a Second Amendment sanctuary resolution to head off potential gun control legislation promised by Governor Ralph Northam and Democrats who now control the General Assembly.

At the beginning of November, only a handful of localities in Virginia had passed a sanctuary resolution. That number has grown by the dozens in the past few weeks.

Supervisor Phillip McCall agrees with the stance but said he represents others in the county who are not fans of guns.

“I did have a number of people contact me. They were in opposition to this but they were afraid to come speak and that’s not good. They feared for retaliation,” McCall said.