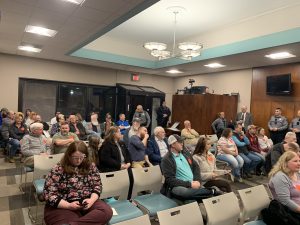 The Bristol, Virginia City Council has approved a resolution that supports the constitutional rights of citizens.

A large crowd was on hand at Monday night’s meeting, with several in support of protecting the second amendment, as many surrounding Southwest Virginia counties have already passed resolutions declaring themselves 2nd amendment sanctuaries. While the city’s resolution doesn’t specifically state support of one particular amendment such as the second amendment, it does support the entire constitution and opposes any such legislation that infringes on those rights. Council member Kevin Mumpower had this to say concerning the resolution.

“We can play on words, we can make it stronger, we can make it less strong, but the bottom line is, we are not going to allow the government to infringe tyrannically on our rights,” Mumpower said.

Some citizens in the crowd, including Bristol resident and firearm business owner Gary Widner, were hoping for a stronger resolution.

“I think that their (the city council’s) resolution was weak, the one that Virginia Citizens Defense League brought up was much stronger. It’s something, it’s better than nothing, but it’s just not what I would’ve liked to have seen,” said Widner.

The council unanimously passed the resolution 5-0.