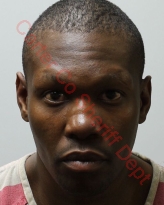 Authorities have arrested a Carter County man for aggravated domestic assault after he allegedly slapped, strangled and shoved a female victim to the ground, then fled police upon their arrival. Elizabethton Police responded to 1444 Milligan Highway in reference to a domestic call. When Police arrived, they found the female victim with a hand mark to the left side of the face as well as marks around her neck and arm. Burton fled police on foot but was apprehended not far from where the incident occurred. Burton was then arrested and transported to the Carter County Jail. Burton has a court date set for January 14.