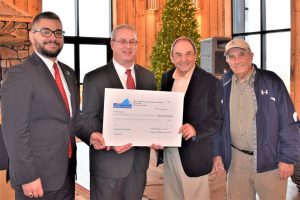 Grants of over $2.15 million are headed to the Buchanan County Industrial Development Authority for infrastructure improvements at the Southern Gap Industrial Park.

According to the Virginia Coalfield Economic Development Authority, they awarded the funds that will be used for things like financing site grading, site development, road construction, paving, and utility installations among other improvements to the Southern Gap park. Funds will also head towards developing a paved access road from State Route 744 to the shell building currently under construction at Southern Gap as well as extension of the road to connect a future extension of Greenbrier Road.

“VCEDA is pleased to assist the Buchanan County Industrial Development Authority in the continued development of its Southern Gap properties,” said Jonathan Belcher, VCEDA executive director/general counsel. “Just last month, we were pleased to be involved in the announcement that the county IDA’s new shell building, which is still under construction, already has a tenant committed to move in – Paul’s Fan Company — bringing with it 40 new jobs and retaining 42 others. Planning now ensures the county is ready when future opportunities arise.”

“The development of the proposed access road also offers a convenient opportunity to simultaneously complete additional grading and site work on each side of the road, creating two additional future industrial sites that will then be project-ready,” said Jay Rife, chairman of the Buchanan County Industrial Development Authority. “The end result will see the partial completion of a cluster of new, marketable industrial properties at Southern Gap, anchored by the 80,000-square-foot shell facility to be occupied by Paul’s Fan Company.

“The funds will also extend base utilities along the new access road and complete paving work around the shell building, including an attached parking lot area,” Rife continued. “Lastly, the funds will extend high-speed fiber throughout Southern Gap where fiber does not already exist. This is expected to extend fiber to every potential development site in the current Southern Gap master plan.”

The development is a 3,000 plus acre area in Buchanan County controlled by the county’s Industrial Development Authority.