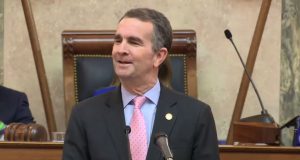 “We serve the people and they have been clear, they expect us to face Virginia’s modern challenges and to lead the way forward to make our shared home an even better place to live and work.”

Snippets from Virginia Governor Ralph Northam’s State of the Commonwealth address Wednesday night. Lawmakers returned to Richmond yesterday with a new look as Democrats control the House and Senate for the first time in 25 years, and will look to make sweeping changes to several of Virginia’s current laws. During’s Northam nearly hour long speech, he touched on several topics that included the state’s prepared investments in education, the economy, health care, criminal justice reforms, and gun legislation, to which he lauded for civil discussion.

“Let’s have an honest conversation based on fact, not fear. I ask all Virginians to refrain from promoting fear and intimidation,” said Northam.

To view Northam’s full address, you can watch here.